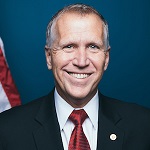 Senator THOM TILLIS (R-N.C.), Chairman of the Senate Judiciary Committee’s Subcommittee on Intellectual Property generously shared his thoughts on several important IP issues. Thanks to Senator Tillis and his team for allowing us to publish the following Q&A for our Daily News readers.

Senator Tillis, last May you and several of your colleagues released a draft bill text to reform Section 101 of the Patent Act. Subsequently, you held several hearings on that state of patent eligibility in the U.S. where you received input from stakeholders both in favor and opposed to 101 reform. What have you learned from this process and when—if at all—can we expect a Section 101 reform bill to be introduced?

Thank you for asking this important question. As you indicated, last year my Subcommittee held three hearings on the state of patent eligibility and heard from an unprecedented forty-five diverse witnesses. The vast majority of these witnesses—representing academia, private business, and former USPTO Directors and federal judges—agreed that our current eligibility standard is unworkable and having a negative impact on research, development, and innovation across all sectors.

However, we also heard from multiple witnesses who support the current eligibility jurisprudence. These witnesses expressed legitimate concerns with our draft framework, especially regarding the potential for litigation abuse and inhibiting basic, fundamental scientific research. As I noted at the end of our series of hearings, more work needed to be done to address all of the legitimate equities.

Given the reasonable concerns that have been expressed about the draft as well as the practical realities of the difficulty of passing legislation, absent stakeholder consensus I don’t see a path forward for producing a bill—much less steering it to passage—in this Congress.

I’d encourage all stakeholders to work with Senator Coons and me to develop a consensus driven approach. If we’re going to get anything done on this issue, everyone will have to compromise. Anything less than that is dead on arrival.

Our country is a world leader in the pharmaceutical and biotechnology space, and the state of North Carolina is a large driver of that success. What about our country allows these companies to thrive, and what, if anything, can we do to enhance that success?

I appreciate you acknowledging the important role the state of North Carolina plays in pharmaceutical and biotechnology innovation. North Carolina is home to many innovative, entrepreneurial companies that not only produce world-renowned products which benefit consumers, but also provide high-paying, good jobs to tens of thousands of North Carolinians. One of the reasons these companies flourish in our country—and North Carolina—is because of the robust intellectual property protections the United States provides. To me, intellectual property represents the ultimate public trade-off and benefit: in return for term exclusive property rights, innovators and entrepreneurs are incentivized to bring new, exciting products to market. These products in turn ensure that consumers have more choices and, in the biopharmaceutical context, ultimately better healthcare.

Without these critical protections, why would anyone in their right mind spend hundreds of millions, if not several billion dollars, bringing a new product or drug to market? The reward is simply outweighed by the risk. It concerns me that several of my congressional colleagues either don’t understand or don’t care about the nexus between robust intellectual property protections and innovation.

I want all of these great American companies, but especially our North Carolina companies, to know they have an ally in me in the U.S. Senate. As long as I’m a Senator, I’ll fight to keep robust IP protections. This benefits everyone, from the average consumer to the millions of people who work in this sector and depend on research, development, and innovation for their quality, good-paying jobs.

A 2017 study on “The Economic Impacts of Counterfeiting and Piracy” found that the estimated value of international and domestic trade in counterfeit and pirated goods was over $1 trillion in 2013 and is projected to reach nearly $2 trillion by 2022. What can Congress do to stop the flow of counterfeit goods—many of which are dangerous and illegal—from entering the U.S.?

This is a critically important issue. My Subcommittee examined this issue at our World IP Day hearing this past April. The testimony at that hearing was enlightening, for several reasons. A lot of times when we think about counterfeit products, we simply think of the economic impact to American businesses. Now, don’t get me wrong, that’s important. Thousands of American businesses suffer millions of dollars in losses every year due to counterfeit.

But, the thing I found fascinating about this hearing is that it really highlighted the consumer safety angle of counterfeits. One of our witnesses was from a major sports safety equipment company. He demonstrated to the Subcommittee how a counterfeit bicycle helmet could be shattered by a light jump, clearly not the type of helmet you’d want to have on if you were in a major crash. In contrast, their authentic, patented product wouldn’t crack even if you jumped from the top of a ladder. Clearly a major difference.

One of the things we also found out at this hearing is that there’s a major loophole that allows counterfeiters to get their products into the United States. Right now, Customs and Border Protection has the authority to seize fraudulent trademarks and copyright infringing material. They lack the authority to seize products that infringe a valid design patent.

Matt Priest from the Footwear Distributors and Retailers of America testified that sophisticated smugglers are aware of this loophole and, to get their products into the country, they simply ship the infringing design counterfeit separate from a fraudulent trademark. Even if Customs knows the products are in fact fake, they can’t seize them. After the hearing I heard from a number of manufacturing companies and other retailers who are experiencing the same problem.

So, I decided to act. Working with a few members of the Subcommittee, we came up with a bill to close this loophole. It’s called the Counterfeit Goods Seizure Act of 2019. I’m currently working with the Senate Finance Committee to get this bill marked up, and hopefully passed this Congress.

While people may have legitimate disagreements about a number of IP issues, everyone should agree that counterfeit products which harm American businesses and consumers shouldn’t get into the country. My bill is a small but important step towards ensuring they don’t.

As Chairman of the IP Subcommittee, you have made oversight of the USPTO and U.S. Copyright Office IT modernization projects a priority. Towards that end, how would you grade the progress made by both offices since your chairmanship began in 2018?

One of the first lessons I learned from the then Chairman of the Judiciary Committee, Chuck Grassley, is that oversight is one of the most critical roles we have in Congress. Legislating is hard and takes years, sometimes decades. Oversight is much easier. Oversight just takes one person: the Senator or Subcommittee Chairman who is engaged in it. Taking the great lesson I learned from then Chair Grassley, I decided early on that oversight was going to be one of my Subcommittee’s top priorities.

These efforts have produced tangible results. The Patent and Trademark Office has made a number of changes to the Patent Trial and Appeal Board to make it a fairer, equitable adjudication forum. I like to think that the letter I sent with Senator Coons in April played a part in those changes. In the summer and fall my office sent multiple letters to the Librarian of Congress and the Copyright Office. As a result of those efforts, and my Copyright Office modernization legislative initiative, we’ve seen the Library and Office make tangible strides towards transparency and greater stakeholder engagement.

But, I can’t take all the credit. The broader intellectual property community is well served by great leadership at all of these offices. Andrei Iancu is an extraordinary Director at Patent and Trademark, a real leader, and so many good things are happening because of him. At the Library, Dr. Carla Hayden has made Copyright Office modernization a top priority and is a delight to work with. The Copyright Office was well served by Karyn Temple and now is in good hands with Acting Register Maria Strong. I’m grateful to all of them for their leadership and looking forward to continuing to work with them as I continue to conduct oversight in 2020.

In just two years as Chairman of the Senate Judiciary IP Subcommittee, you have held 12 hearings on a variety of important and complicated IP issues. What topics should we expect to be covered in hearings in 2020?

Thank you for the compliment and kind words. I’ve been honored to serve as Chair of the reconstituted Subcommittee. Intellectual Property is a fascinating area of the law, and I’m fortunate to have such wonderful colleagues to work with. Senator Coons is a fantastic Ranking Member. He’s really engaged, smart, hard-working, and a good friend. I’ve also enjoyed working with the other members on the Subcommittee, both Republicans and Democrats.

One of my goals when I became chair of the reconstituted subcommittee was for us to actually be active. So many Senate Subcommittees are under-utilized. That’s not what I wanted. I decided early on I wanted to work, and use this opportunity to tackle some of the biggest issues of the day.

We had a busy year in 2019. 12 hearings, averaging one a month. 2019 was a patent heavy year. 2020 is going to be focused on copyrights. I announced in an op-ed in December that we would be spending all of 2020 focusing on various aspects of the Digital Millennium Copyright Act. I envision having at least 10 DMCA related hearings throughout the year, with the goal of producing a draft reform bill by December. It’s going to be a huge lift, but it’s an issue that needs to be addressed. I’m happy to tackle the challenge, and I’m looking forward to this process.

In recent years, we have seen a considerable increase in fraudulent trademarks, creating problems for U.S. businesses both large and small. The USPTO has attempted to address the issue, but with little success. Do you intend to examine this issue in 2020, and if so what types of legislative fixes would you recommend?

We actually held a hearing on this topic in December. We heard from a variety of academics and practitioners on this topic. Hearing about how fraudulent trademarks are harming businesses—especially small businesses and startups—really hammered home the issue for me. I’ve been part of a bicameral, bipartisan working group led by the Chairman and Ranking Member in the House. Their staff, Jamie Simpson, Mary Beth Walker, and Tom Stoll, have been great to work with. We’re still running traps and working with stakeholders, but I’m hopeful we will have a fraudulent trademark legislative package soon. This is an easy issue that Congress can legislate on, even in an election year. I’m proud to be working with my colleagues and their teams to address this problem, and looking forward to getting this bill introduced.

You can find out more about which cookies we are using or switch them off in settings.

This website uses cookies so that we can provide you with the best user experience possible. Cookie information is stored in your browser and performs functions such as recognizing you when you return to our website and helping our team to understand which sections of the website you find most interesting and useful.

Strictly Necessary Cookie should be enabled at all times so that we can save your preferences for cookie settings.

If you disable this cookie, we will not be able to save your preferences. This means that every time you visit this website you will need to enable or disable cookies again.